The many visitors to the market are greeted by the original Erzgebirge Christmas pyramid that stands at the entrance of the Erfurt Christmas Fair. 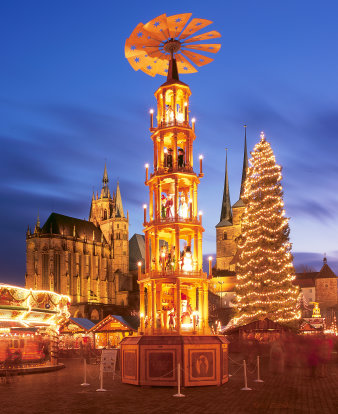 This towering pyramid, which is made up of several sections, is one of the main attractions at Erfurt Christmas market.

The twelve metre tall pyramid was built in 2005 in the traditional handcrafted Erzgebirge style by the artisan woodworking company Gahlenz.

Each of the five octagonal sections has its own distinct theme, and they are all edged with pillars and decorative fencing. The pyramid features a total of 30 life-size wooden figures.

The Erfurt Christmas pyramid is financed solely by donations and sponsorship. A collection has been held at every Christmas market since 2000, inviting those involved in the market to contribute towards the initial cost of the pyramid. But donations have also been made by a numbers of organisations and locals who prize the festive appearance of the city centre.

Design and figures of the Erfurt Christmas pyramid

This section is a tribute to the Erzgebirge mountains, the birthplace of Christmas pyramids, and features only traditional festive figures from this region.

This section is dedicated to the city of Erfurt and depicts notable figures from its history together with the Gloriosa bell, which swings above their heads. The original, which hangs in the cathedral, is the largest free-swinging medieval bell in the world. It was cast on 8 July 1497 by Geert van Wou from Kampen and weighs 11.45 tonnes, measures 247 cm in height and 257 cm in diameter, and chimes in the tone of 'E'. Experts everywhere agree that it has one of the most beautiful chimes of any bell the world over.

Born in around 316 AD, Martin of Tours is the patron saint of Erfurt. Legend has it that he once split his cloak to share with a beggar and that night, Christ appeared to Saint Martin wearing the half cloak he had given away. It was Christ, disguised as a beggar, who had tested Martin.

The first written record of Erfurt dates back to 742 AD and a letter written to Pope Zachary by Saint Boniface. Known as the 'Apostle of the Germans', Saint Boniface had a church built in Erfurt and established a diocese here.

Born in around 1300, the mischievous jester Till Eulenspiegel made it look like he had taught a donkey to read and in so doing made a mockery of respected professors at Erfurt University.

The great mathematician lived in Erfurt from 1518 to 1523 and it was here that he penned some of his books on arithmetic. In tribute to him, an abacus is depicted on the pavement outside the Haus zum Schwarzen Horn on Michaelisstrasse, beneath a memorial plaque.

The church reformer spent some important years of his life in Erfurt. Between 1501 and 1505 he studied at Erfurt University. During a violent thunderstorm on 2 July 1505 he vowed that he would become a monk. On 17 July 1505 he joined the city's Augustinian monastery as a novice and in 1507 he was ordained as a priest in St. Kilian's chapel at the cathedral. He then spent two years studying theology in Erfurt. After a brief spell teaching in Wittenberg in 1508, Luther returned to Erfurt in 1509. Even after he moved to Wittenberg in 1511, the reformer continued to make short but regular visits to Erfurt. Luther's ten years in Erfurt between 1501 and 1511 clearly left a lasting impact on him. He later described Erfurt University as "my mother, to whom I owe everything."

Kurrende were choirs of schoolboys who sang on the streets and at official occasions. The German word kurrende is derived from the Latin currere, which translates as running or hurrying. Originally the groups would go from house to house singing German and Latin Christmas carols and collecting donations of bread, fruit, nuts, sweets or small change. They would then give these to poor children to brighten their Christmas.

In days gone by, fanfares could be heard from the church towers in the towns of the Erzgebirge mountains during Advent. And to this day, seasonal brass music rings out from many of the region's towers, including St. Bartholomew's Tower in Erfurt, to herald the approaching Christmas festival. The very top of the Erfurt Christmas pyramid is modelled on the spire of St. Mary's Cathedral, providing one final reference to Erfurt and the Christmas market's immediate surroundings.

Impressions from section 4 and 5